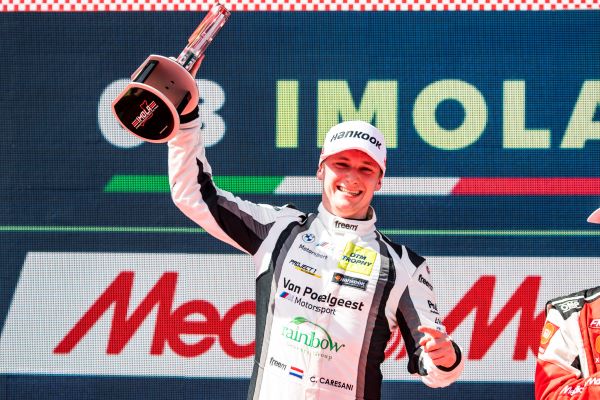 Dutchie Colin Caresani has scored his maiden win in the first DTM Trophy race at Imola. With the BMW M4 run by the Project 1 team, Caresani took the chequered flag in first place after 17 laps of the Autodromo Enzo e Dino Ferrari in what was only his third race in the talent pool on the DTM platform.

Caresani laid the foundation for his maiden win right at the start. In the first corner, he already took the outside next to Frenchman Edouard Cauhaupé (BWT Mücke Motorsport), who had started from first place. The Mercedes-AMG driver defended fiercely, but Caresani eventually still found a way past. In the course of the opening lap, Cauhaupé even dropped back to fifth place. After that, Caresani dominated proceedings at the front of the field together with Riegel, their progress only slowed down by two safety car interventions.

Toyota driver Tim Heinemann (Toyota Gazoo Racing Germany powered by Ring-Racing) retired early but retains the lead in the driver’s standings in spite of his retirement. The German remains with 57 points to his tally, Caresani is next with 43 points from Oeverhaus with 38 points.

The second race of the DTM Trophy, run with production-based GT sports cars, will get underway on Sunday at 3.15pm CEST and will be broadcast live on the streaming platforms ServusTV ON (servustv.com) and DTM Grid (grid.dtm.com).