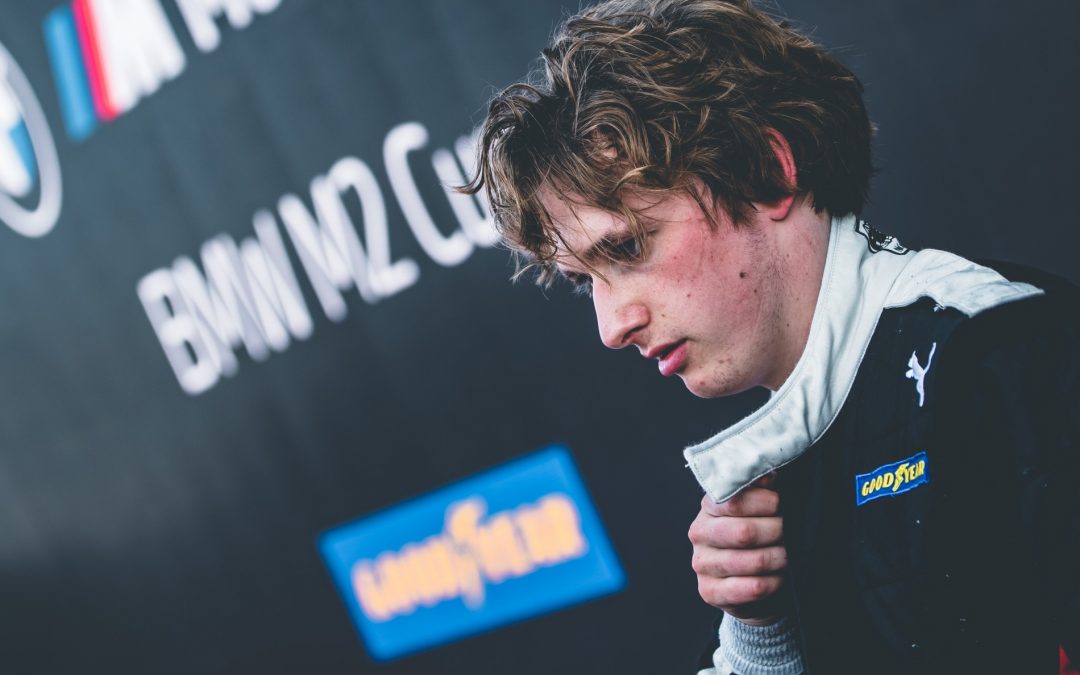 Doing double duties – racing in both the German DTM BMW M2 Cup and the Dutch VRM BMW M2 Cup – Colin Caresani was not very successful this weekend in gaining points for the Dutch championship.

The leader of the competition finished P5 in race 1 and P6 in race 2.

Soon after the start of the first race, Caresani takes the lead from Maxime Oosten, but an oil trail from the Rappange/Warmerdam car quickly creates a safety car situation. The order in the race is then Caresani in the lead, 2nd Maxime Oosten and 3rd Willem Meijer.

The safety car is still leading the way when the pit window opens after 30 minutes of race. Front runners Caresani and Oosten are called in just too early by their team and that has major consequences, because this means they have to make a second pit stop. Due to all the chaotic situation, the pit stop brings a lot of changes to the field.

But already in the next lap the safety car has to enter the track once again. With only 17 minutes left on the clock, the ranking is no longer as it was at the start of the race. After the double pit stop of the two leaders, Willem Meijer now leads the race ahead of Lorenzo van Riet and Rogier de Leeuw. Original leaders Caresani and Oosten have dropped to 7th and 8th places.

It proves difficult to fight forward, as the field is now so nestled between the Supercar Challenge drivers that there is hardly any direct battle with the other BMW M2s and the positions hardly change.

In lap 27 Willem Meijer is the first to cross the finish line ahead of Lorenzo van Riet. Kelvin Snoeks is third and team Magdziarz-Pijl fourth. After the downer with the double pit stop Colin Caresani has to settle for a fifth position and Maxime Oosten is also not happy about his sixth place. 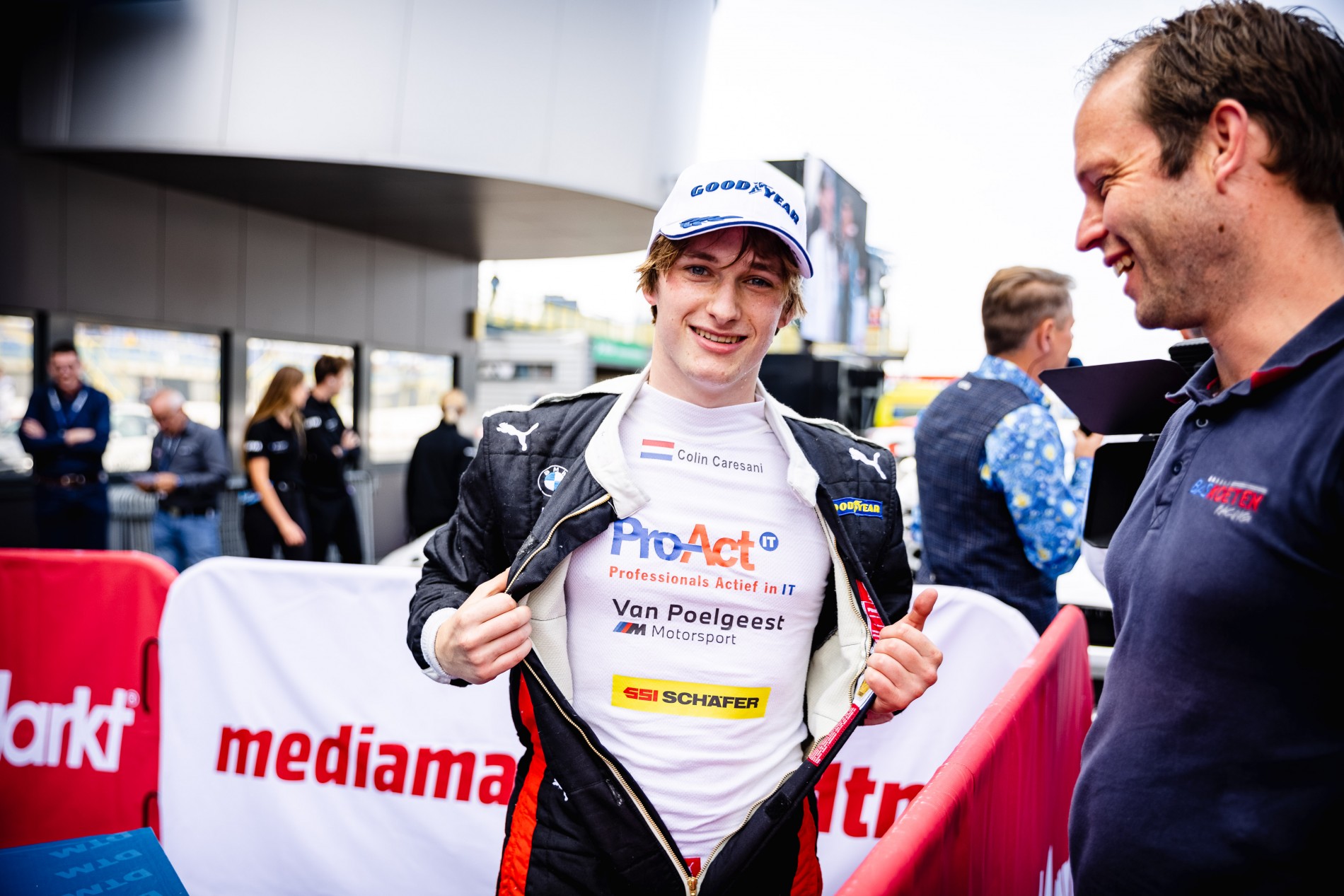 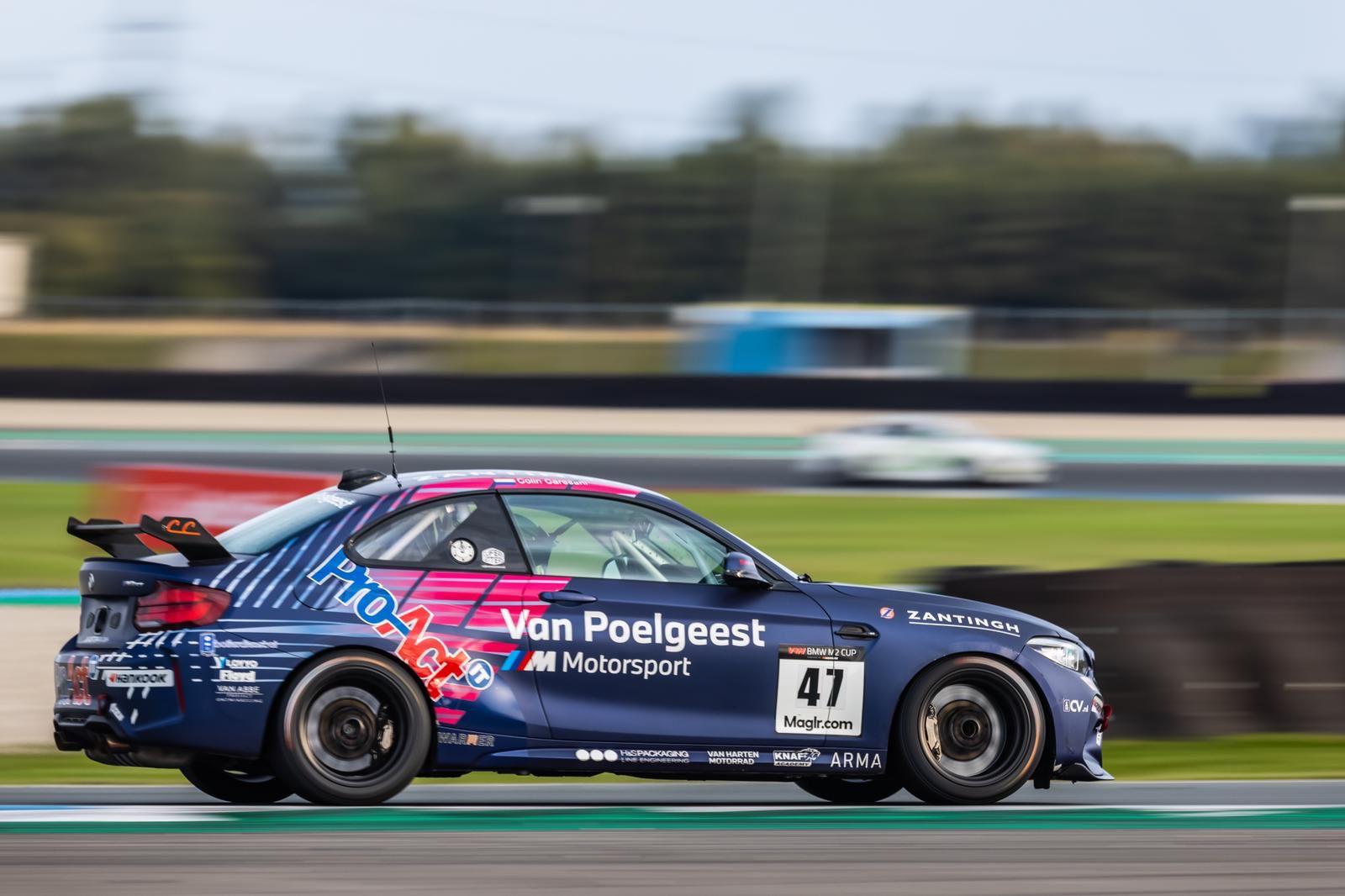 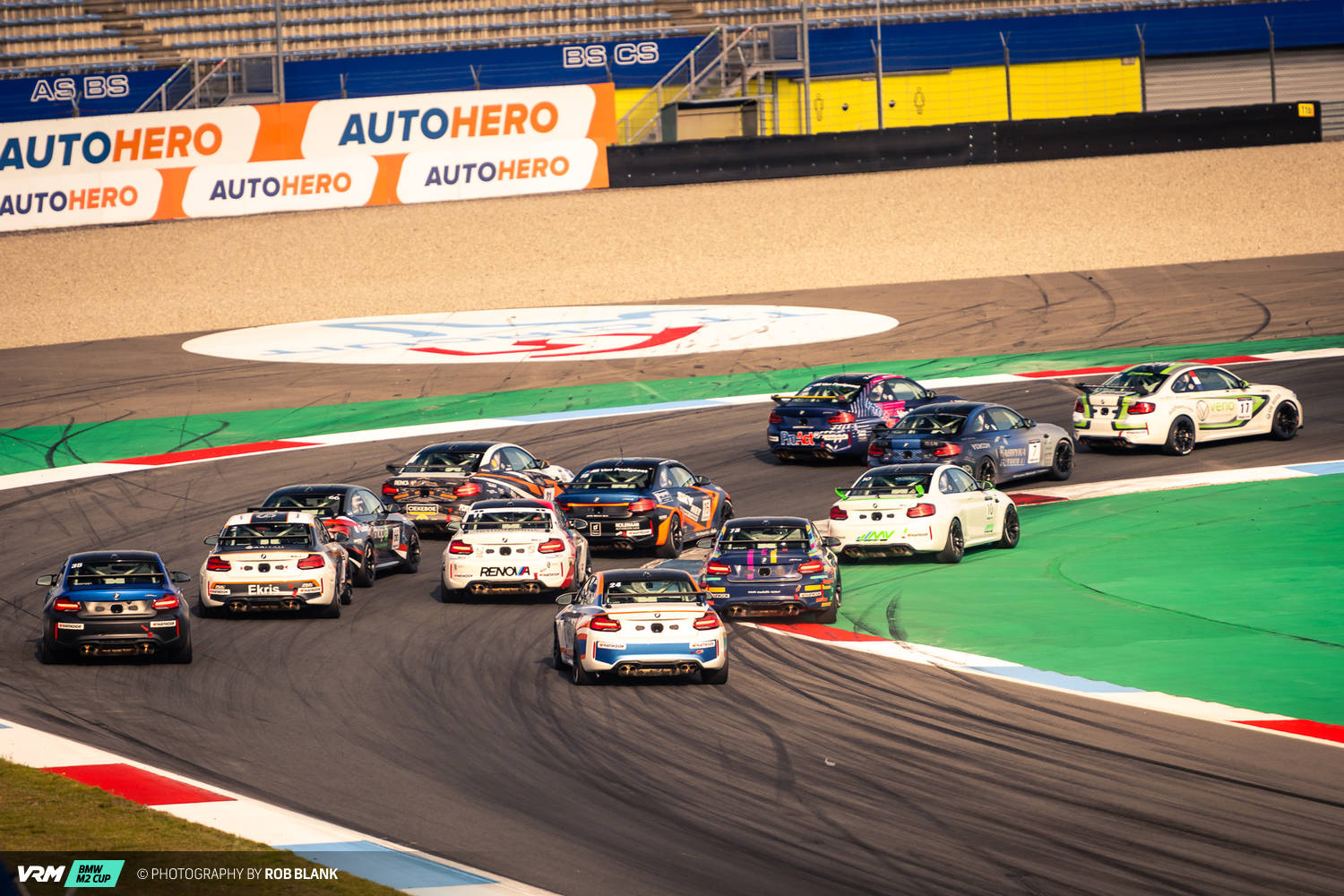 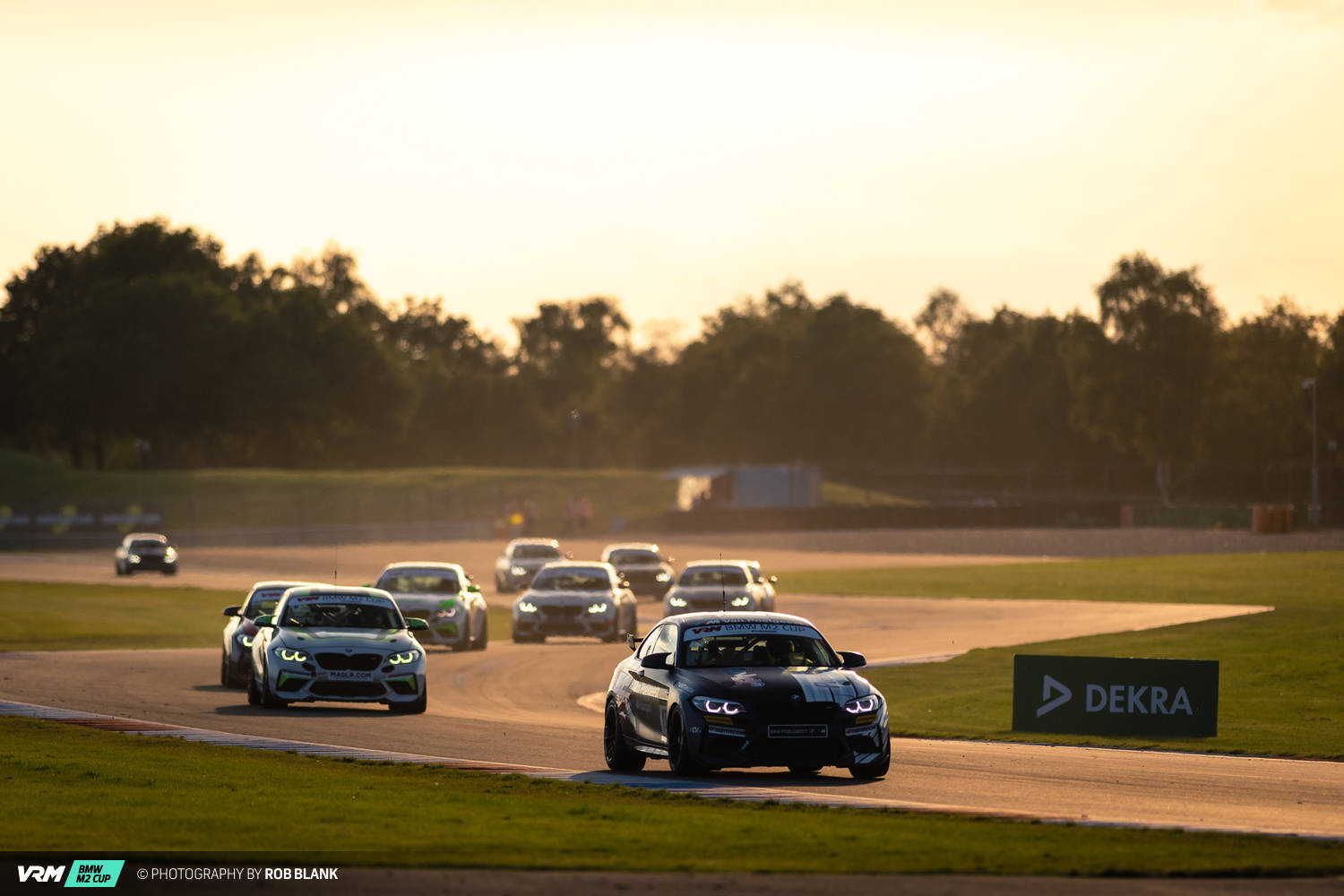 After the incident-filled race on Saturday, the drivers of the VRM BMW M2 Cup are now eager to get to racing. Just like in the first race, the front row is for Maxime Oosten and Colin Caresani, the second row for Tomasz Magdziarz and Lorenzo van Riet.

Oosten has a good start and is first heading into the Haarbocht. Caresani is lurking for a hole, but there isn’t one and so he joins up behind the Frisian driver. The safety car enters the track due to a crash between some participants of the Supercar Challenge. The restart is in the fifth round.

Dirk Warmerdam went for Caresani. There was light contact, but no action needed, both can continue the fight and lose no positions.

Kelvin Snoeks joins Caresani and Warmerdam. This creates a good fight for the podium places. Oosten has already taken a nice lead and seems out of reach. Snoeks hits Caresani in the Haarbocht and the classification leader loses two places. This is also seen as a racing incident and there is no penalty.

After the mandatory pit stop it is finally clear where everyone is driving. Oosten is still in the lead, Meijer follows at some distance and Van Riet has moved up to third place. Dante Rappange has taken over from Warmerdam and is fourth, Snoeks fifth and Caresani is struggling in sixth place.

After 31 laps Maxime Oosten crosses the finish line first. Colin Caresani was unable to reach his normal speed this race and has to be content with sixth position, just ahead of team Magdziars-Pijl.