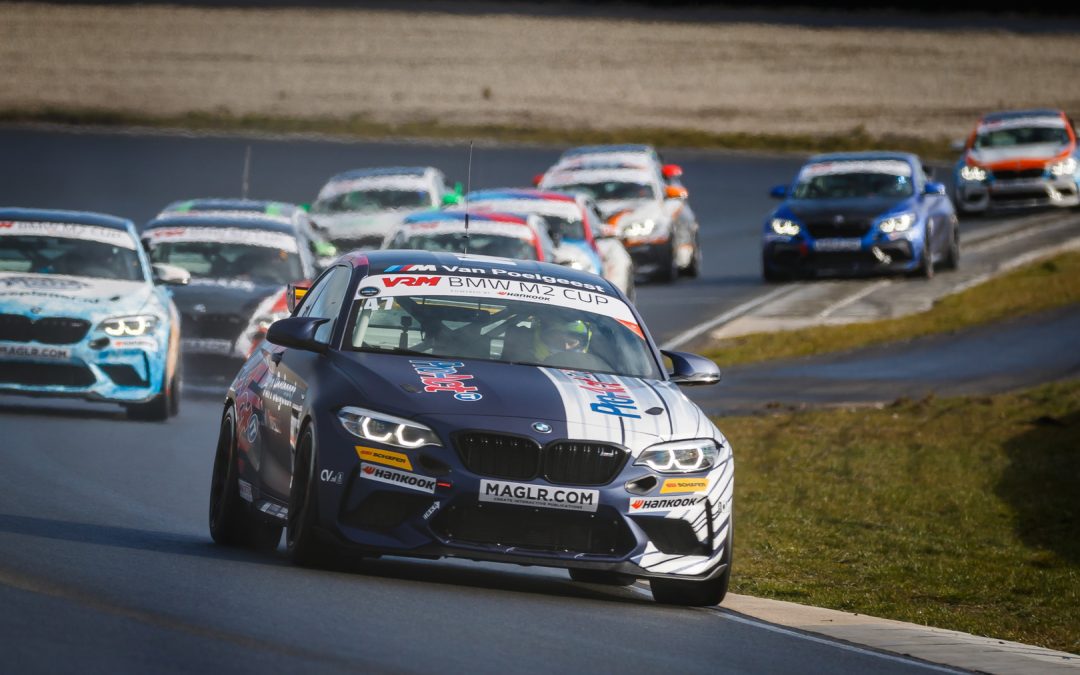 It was a successful race weekend for Colin Caresani, who won both races at CM.com Circuit Zandvoort.
During the first race on Sunday April 11, he dominated the field. Impressively, he won the first race in the history of the VRM BMW M2 Cup. The driver, the 2020 Ford Fiesta Sprint Cup champion, took the lead from the third starting position and only managed to increase his advantage on the treacherously slippery track. At the finish, Caresani’s lead over the runner-up was just over 21 seconds.
That didn’t mean the race wasn’t exciting, however. Behind Colin, there were not only many fine battles and battling groups, but also many position changes.
The rolling start is for Pijl while Van Riet is surprised by Caresani. Albert Jochems is the first victim of the wet track and spins. In the first lap, several drivers have difficulties while other drivers benefit from their experience. After the first lap, Caresani leads, ahead of De Groot, Pijl and Warmerdam with Van der Aa on five.
After eight laps, Caresani has a 2.6 second lead on De Groot, while a battle for third place erupts between Pijl, Van der Aa, Van Riet and Meijer. It gets even better when this foursome starts to catch up with De Groot. Warmerdam has to allow a growing gap on place seven and has a fight with Oosten, who in turn is followed by Snoeks.
It is clear that Caresani has benefited from his experience on the cold track in part one of the race as the leader takes a lead of over 12 seconds on Vandenbalck, who has had an excellent pit stop. Behind at almost 6 seconds Bogaerts who has Snoeks on his bumper. Bleekemolen and Zumbrink battle for places five and six. Big loser is Magdziarz who took over the wheel from Pijl and fell back to place nine behind Oosten and Rappange.
With 15 minutes to go Caresani seems to be heading for victory as the leader has increased his lead over Vandenbalck to 15,5 seconds. In the final minutes of the race, there is no problem for Caresani as the leader keeps on setting fast lap times and increases his lead.
At the finish Caresani has a respectable 21 second lead on his pursuers. Vandenbalck manages to win the second place with a difference of 0.2 seconds on Bogaerts. Again 0.2 seconds behind Bogaerts, Snoek, who started in 14th place, takes fourth. Behind them, Zumbrink, Oosten, Bleekemolen, Rappange and Magdziarz complete the top nine.